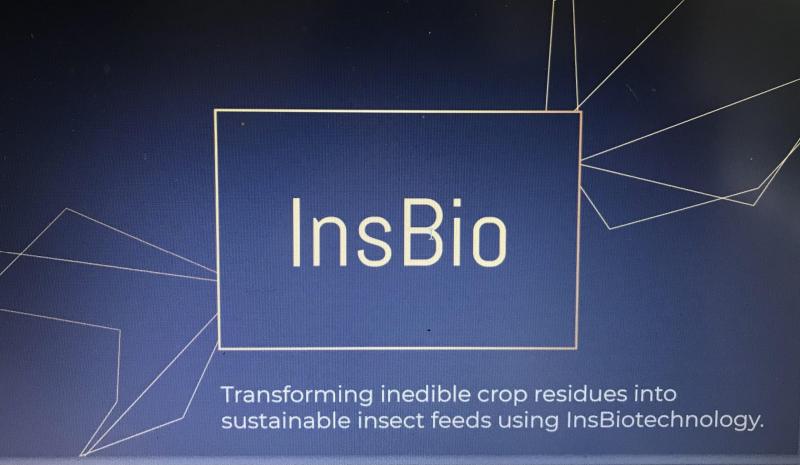 In this year’s final of the Global Biobased Businessplan (G-BiB) competition three young  and innovative teams from across Europe competed to be awarded the winner  2020/2021. After nearly half a year of developing their business, taking masterclasses to  improve both their business case and their competences to bringing across their  message, and being individually mentored by the experts, the international final was  held as a virtual event with more than fifty participants ranging from big industry,  through venture capitalists to bioeconomy experts from universities and consultancies.

The UK-team InsBio was awarded as the winning team by the expert jury under the  direction of Stefan Fasbender from the High-Tech Gründerfonds, the Seed Investor in  Germany, who sponsored the award of this year’s competition.

InsBio was awarded for a process platform that can be used to produce raw materials  for breeding larvae of the black soldier fly as a source of protein. Agricultural residues  are used as the starting material. They are inexpensive and accumulate on an annual  scale of millions of tonnes. With this technology, the black soldier fly can be produced on  a scale that was not possible with previous feeds.

Banana waste for the car

The German team BioInterio, which includes Balaji Subramanian, Chellapan Vigneshwar,  Deepak Sundar, Henry Stehle, Maryam Sodagar, Naveen Dhayanithi and mentor  Christopher Greb, came from RWTH Aachen in this round. Its members also dealt with  residual materials and combined them with a traditional strength of the university: they  produced biodegradable interior trim components for vehicle construction from banana  fibres, which are waste materials from the cultivation of the fruit.

Year-round vegetable cultivation on the balcony

The Finnish team has developed a vegetable growing cabinet for the balcony. Cloud based, the microclimate in the small chamber is controlled and enables year-round  domestic production of vegetables even in wintry Finland without blocking living space.  At the same time, transport routes and packaging material are eliminated.

The winning team InsBio said after the final: “The G-BiB was a fantastic experience – thanks to all those involved! We now look forward to a business mentoring programme  by High-Tech Gründerfonds, a German venture capital investor for innovative  technologies, in which we will prepare for a pitch later in the year with the hope of securing significant investment to further InsBio’s development.” Also the other teams  will continue the journey equipped with their new and improved skills.

In autumn 2021 the next round of the G-BiB will start again to support young and  innovative scientists to become an entrepreneur.

The G-BiB is an international student competition on business ideas for a biobased product or  process. In 2020/2021 it was organized by CLIB in Germany, Smart Chemistry Park in Finland, and  THYME in the United Kingdom. It was funded by the Federal Ministry of Education and Research  and Research England.

As part of the CLIB coordinated project CROSSBEE – Cross-border Bio-Economy Education – aiming at promoting sustainable economy thinking and entrepreneurship among students and  young professionals, the G-BiB is part of the BIG-Cluster activities. The BIG-Cluster initiative is  formed by ten clusters and networks from the Netherlands, Flanders (Belgium) and North-Rhine  Westphalia (Germany) and aims at fostering the bioeconomy in the project region.

More information on the initiative and all projects can be found on https://www.bigc-initiative.eu/